Bill O’Reilly Defends Brian Williams from ‘Sewer’ of the Internet 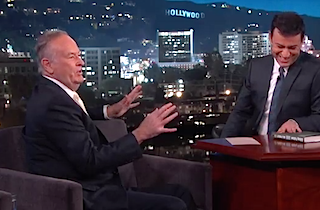 Bill O’Reilly offered up a surprising amount of compassion for Brian Williams during his appearance on Jimmy Kimmel Live last night, saying he’s inclined to give the NBC Nightly News anchor the benefit of the doubt, as long as it doesn’t come out that there are more instances of exaggeration in his actual reporting.

“I feel that anybody who is enjoying the destruction of this man, you’ve got to look at yourself here,” the Fox News host told Jimmy Kimmel. “And there’s a lot of people that seem to be real happy that his career’s going down the drain. That disturbs me.”

O’Reilly said Williams “made a mistake” and will lose his job if more instances of lying are uncovering. “He can get one,” he added, before telling Kimmel his own Iraq helicopter story, albeit one that did not include supposed RPG fire. “It’s intense,” O’Reilly said, explaining that he could see why someone who try to puff up those war stories, especially on late night TV in order to not sound like a “dweeb.”

“Look, every public person in this country is a target,” O’Reilly said of his “compassion” for Williams’ situation. “And with the internet — and you know what it is, it’s a sewer — and these people delight in seeing famous people being taken apart. And I just think it’s wrong. I mean, we’re human beings just like everybody else.”

“If there’s a doubt with Brian Williams, I’m going to give it to him,” O’Reilly said.

On his Fox show last week, O’Reilly said he suspected Williams was just trying to seem “cool” when he told the exaggerated helicopter story repeatedly over the years.