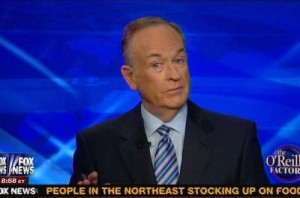 After writing last night about how Bill O’Reilly erroneously claimed NBC has ignored the drone strike Justice Department memo that NBC actually released, I was looking forward to seeing how O’Reilly could possibly explain away his claim tonight. Well, at the tail end of his program tonight, O’Reilly responded to the criticism by 1) attacking his critics, and 2) denying he said… what he said.

TVNewser was “tipped off” to the fact that O’Reilly would be responding tonight., and boy, did he respond in true O’Reilly fashion. He sighed as he explained how he has succumbed to “more deceit from the far left,” saying that “these loons have been trying to marginalize me” ever since he’s been on the air. He explained why he wasn’t so incredibly wrong about NBC News not covering the story, even though they broke it.

“Last night, I talked with Bob Beckel about the difference in analysis on the subject of waterboarding as compared to killing people with drones… I put forth that NBC News and other media places, they were hysterical over waterboarding, but muted over President Obama’s drone attacks, at least until yesterday.

“Immediately the far-left machine cranked up. ‘O’Reilly didn’t say that NBC News broke the drone memo story. He’s a deceiver!’ True. I didn’t say NBC broke the memo story because we weren’t talking about that. Waterboarding versus drone strikes. So once again, we have a propaganda campaign designed to make ignorant people on the left even more ignorant.”

So Bill O’Reilly’s defense is basically “I never said NBC News broke the story because I wasn’t talking about whether or not they covered it, but HOW MUCH they covered it.” Which would be acceptable, were it not for that fact that he actually DID insist at various points that they have said nothing, nada, zip about drones.

To wit, here’s some of what O’Reilly said last night:

“Remember the outcry over waterboarding? You know, everybody jumping up and down? NBC News, I thought they were going to, like, melt down over there. You heard anything on NBC about the drones?”

To be clear, O’Reilly is correct on principle that liberals have been far less vocal about national security policies under Obama than they did under Bush. But he specifically said has not heard anything, that we’ve heard “a lot about waterboarding, but nothing about drone strikes.”

I thought this was the No Spin Zone…

And for reference, here’s O’Reilly’s original commentary from last night: