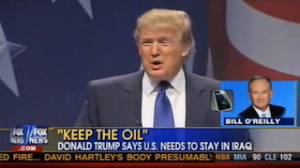 Bill O’Reilly just wrapped up a two-night interview with potential presidential candidate and future Fox News star Donald Trump. Today on the upcoming home of Trump, Fox & Friends, O’Reilly gave his thoughts on what Trump had to say and he had a fairly harsh critique of Trump’s plan for Iraq, saying, “if you actually did what he’s proposing, the world outcry would be unbelievable.”

The plan in question was summarized by our own Frances Martel thusly:

“Trump apparently found the Bush doctrine of promoting democracy for democracy’s sake in the Middle East preposterous, noting that, in the old days, ‘when you won victories, you win… to the victor go the spoils.’ He noted that leaving Iraq in the recent future would be an unwise move because it would give Iran space to attempt an invasion for control of the oil fields, and America is ‘not going to have enough heart to go back.’ ‘If Iran is going to take over the oil, we stay and we keep the oil,’ he argued simply. The objective, he said, was to ‘pay ourselves back a trillion and a half dollars more… and don’t be so stupid’ that America invested in the Iraq war.”

O’Reilly clearly wasn’t a fan last night and, today, Gretchen Carlson asked him to explain why. This was his response:

“Well, come on. I mean, you’re gonna invade the Iraqi oil fields? They’re not gonna cooperate with that. Iraq’s not gonna cooperate with that. Iraq’s gonna say, ‘Listen, you invaded our country. We didn’t ask you to do it. You’re not gonna take over our oil fields and start doling out money to people including you.’ So, you’d basically be re-invading the country you already invaded to try and get oil. I mean, come on. Can you imagine the world reaction to that?”

O’Reilly did temper these statements by pointing out that this would definitely be the “right” thing to do and that we should get paid back in the way Trump is saying. However, he just didn’t feel it would be feasible. He did, though, think that Trump said things like this mostly to get attention and that this plan would get a lot of people excited since it is the “fair thing to do.”

O’Reilly then said that he thought Trump entering the race officially would “change everything” and that he would be able to say things that the other politicians would be too afraid to.