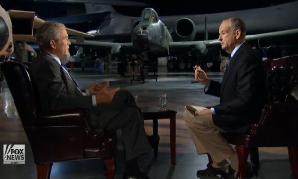 Bill O’Reilly‘s lengthy interview with Pres. George W. Bush amounted to likely the most contentious of all his entire recent media tour, which is interesting on many levels (like when you compare it to Sean Hannity‘s back-patting session).

In addition to the tough questions, O’Reilly, frustrated with Pres. Bush refusing to answer current events questions, countered with a solid argument why his claims of not wanting to undermine Pres. Barack Obama don’t really hold up.

In the raw video of the interview below, you see O’Reilly joke at the very beginning about the line of questioning. “I want to do an interview that’s a little different than the pinheads you’ve been talking to all week,” he said.

Starting with the economy, O’Reilly hammered away at Pres. Bush (in language, not tone). “How did you not see this coming?” he said, and several times jumping in to say “you’re wrong, you’re wrong.”

But when O’Reilly pressed Bush to answer questions about the current policies that are extensions of his past policies, Bush relented. “Ask him, I’m the retired guy,” he said. “You’re trying to drag me into the current affairs, and I don’t want to be drug in to the current affairs.” (And to all you Bush haters, it looks like “drug” is colloquial, and although it should be dragged, could be acceptable.)

This is something Bush has been saying in just about every interview: Oprah Winfrey, Matt Lauer. Bush says he doesn’t want to speak negatively about Obama, or to wade into the “swamp.” But as O’Reilly points out, there’s a flaw to that logic:

What you started and what you were involved with didn’t end when you left. It continues. So the people, when they get an opportunity to hear you and read your book, they want to know about the current state of affairs.

Bush wasn’t having it, saying he would only really be speaking publicly “for this brief moment, to talk with my friend, in order to sell books.” Well, that’s honesty.

O’Reilly did get Bush to answer if he ever talks to the current President. Besides Haiti, “He called me right before his speech, he gave a military speech on Iraq. He was headed into Texas. He gave me a heads up about what he was going to say in the speech and I was grateful for that.”

Here’s the half-hour part one of raw video of the interview, in which he says “I’m not a hater” again: