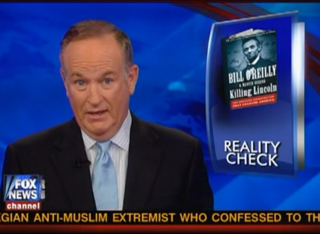 Over the weekend, reports surfaced that Bill O’Reilly‘s new non-fiction book, Killing Lincoln, had been banned from Ford’s Theater– where Lincoln was killed– for factual inaccuracies. Tonight on The Factor, O’Reilly clarified that this was not true, and that the Theater had released a statement that it was, indeed, stocking the book, despite “four minor misstatements” and two typos.

O’Reilly began the bit of his “Reality Check” segment with a look back at an attack on his previous book by Al Franken, who claimed he had lied about his upbringing. “The book documents my history and proves Franken a liar,” he noted, continuing the narrate the claim that his book was not being sold at the theater. He then read a statement from Ford’s Theater confirming the book was in stock, though noting that it did have inaccuracies. “There are four minor misstatements, all of which have been corrected, and two typeset errors,” O’Reilly noted. “That’s a pretty good record.”

As for the misstatements, O’Reilly told his audience he had invited the historian who works at Ford’s Theater onto the show to discuss them, and was waiting on an answer. O’Reilly then turned to those who had made the claim the book was not being sold at Ford’s Theater. “Our enemies are full of rage,” he said, adding that “Killing Lincoln is an honest book that you will enjoy and learn from… all the gutter-sniping in the world won’t change that.”

The clarification via Fox News below: