Bill O’Reilly Gets Heated With John Stossel Over Oil Speculation 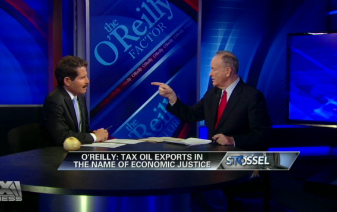 On Thursday night’s edition of Stossel on Fox Business Network, host John Stossel debated Bill O’Reilly over the oil industry and whether government should limit oil speculation. O’Reilly wants government to regulate oil speculation and tax the exporting of American oil. Libertarian Stossel argued against these views, prompting O’Reilly to say “I want you deported!”

O’Reilly suggested oil speculators are gambling “crooks” and that there should be a required 50% fee on their speculation. “They don’t want the oil. If they want to go to Vegas, go. If they want to get to Mohegan Sun, go. We all need oil to live, and I don’t want a commodity that my family needs to live to be the subject of speculators who are gambling like it would be in Vegas.”

Stossel then broke out his latest prop, a white onion. “This is the one product the government said we’re going to stop speculation. In 1958, the U.S. Agriculture Department was so upset that the price of onions went up.”

O’Reilly interrupted, “Stop it. I don’t care about onions or any of this other stuff.”

“Hear me out. It’s my show,” Stossel responded. “They banned [onion speculation]. Since then, what’s happened? The price has gone up and down more. And onions went up more than oil this year.”

Stossel then confronted O’Reilly over his proposal to tax the exportation of American oil. In his explanation, the Factor host likened himself to an unlikely group: “I just want economic justice, kind of like the communists that are running around with Occupy Wall Street.”

“Who owns the land in the United States? Let’s have everybody out their watching sing the song: ‘This land is your land, this land is my land.’ Remember that song? You’re old enough, you probably wrote it,” O’Reilly joked. “We, the people, own the oil, okay?”

O’Reilly then described how oil companies drill for the oil (accompanied by his own mouth-produced sound effects) and often ship it to other countries. “I don’t want my oil going to China,” he shouted. “Oil prices here are so high!”

“You want to punish American companies that are good at refining,” Stossel shot back.

“Free trade is good. You want to keep everything we make in America here?” Stossel asked.

O’Reilly then said that exporting to China raises gas prices at home. “Why don’t you see this?” he asked Stossel.

“They would retaliate,” Stossel replied. “Free trade is good. This is a bad idea.”

(On a side note: Anyone else notice how whenever Stossel interviews O’Reilly for his own show, they always tape in O’Reilly’s studio?)

Check out the segment below, via FBN: