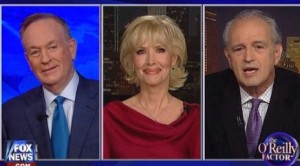 On his show last night, Bill O’Reilly found a new government expense for the people to be angry about: Michelle Obama‘s Spanish vacation. The site Judicial Watch obtained documents showing that when the First Lady traveled to Spain in 2010, it cost taxpayers over $400,000. Some information has been withheld for “security reasons,” which O’Reilly found hard to believe after the fact.

Fox News contributor Janine Turner said this was analogous to a family trying to get by and the head of the household deciding to let his wife go on a fancy European vacation. She bashed the move as “insensitive” and suggested that it “lacks compassion” for struggling Americans. Radio host Jim Braude disagreed, saying as long as there was no scandal or dispute over cost between the Secret Service and local vendors over price, there’s really not much to make hay about. He defended the First Lady’s vacation as a stress reliever, and while it may have been more ideal if she had stayed at a Baltimore motel, as Braude put it, there is nothing inherently wrong with taking the vacation.

O’Reilly said it wasn’t the vacation itself that bothered him, just the cost.

“We’re living in very, very precarious times where a lot of people are suffering. All right? We expect our leadership to be sensitive to that suffering. We have a 16 trillion dollar debt, and you run up a half million, all right, by going to Spain. I mean, I don’t mind the First Lady going to Spain and having five days off. I don’t. But I think that she should have not taken the entourage, that she should have taken it as economically as possible.”

Braude tried to drag the argument out to a larger point about political figures’ seemingly wasteful extravagances, but O’Reilly called him out on it. Both he and Braude agreed that this was not a scandal on par with the GSA or anything like that. O’Reilly said that the nation’s leaders should be “respect[ing] our tax dollars.” Turner credited George W. Bush for his decision to give up golfing as a symbolic gesture to cut down on one of the luxuries of the office.