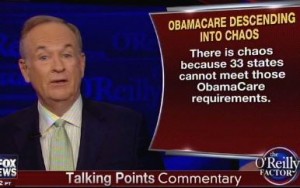 Bill O’Reilly was fired up tonight by the effect of the Affordable Care Act (ObamaCare, which we’ve basically accepted it as by now) on the national economy. O’Reilly laid out exactly what the consequences are of the health care law, and highlighted a new fact about it: in order to help people understand the law, the Department of Health and Human Services is pushing a new proposal for states to hire “navigators” to help explain it to people. O’Reilly confronted his guest, DEMOS’ David Callahan, over how the government is finding yet another way to waste taxpayer dollars.

RELATED: Magic Johnson’s Aside To MSNBC: Many Hospital CEOs Tell Me ‘Obamacare Is Working’

O’Reilly suggested that the “main culprit” for the dismal jobs numbers out today “could be” ObamaCare, citing how businesses are now required to pay more in employee health care costs, and are therefore “not hiring as many people.” He said there has been “chaos” as a result of two-thirds of all states being unable to meet ObamaCare requirements.

But what really set O’Reilly off was the Department of Health and Human Services possibly ordering the states to hire “hundreds of thousands” of these so-called health care “navigators.” O’Reilly found this unbelievable, saying “there’s no objective way to measure advice” and questioning exactly how much taxpayer money these people will get for giving people advice.

O’Reilly told Callahan that he is not an “ObamaCare hater,” but found it hard to see anything positive amidst all these negative consequences. Callahan immediately rebutted the claim that ObamaCare has hurt job growth, and when O’Reilly brought up statistics from the Chamber of Commerce, Callahan said they never really liked the law anyway.

On the health care “navigators,” Callahan argued that it is based on existing programs helping seniors deal with Medicare. O’Reilly argued that unlike in the very clear business of TV ratings, there is no objective way to measure the success of advice-givers. He admitted that if he were to hire a navigator for one of his small businesses, he would pay them out-of-pocket and not let taxpayers foot the bill.

Watch the video below, courtesy of Fox News