O’Reilly Grades Obama on GMA: “He Stabilized The Economy To Some Extent”
video

O’Reilly Grades Obama on GMA: “He Stabilized The Economy To Some Extent” 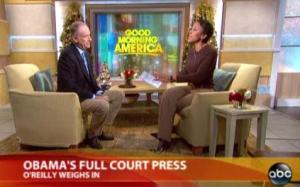 Bill O’Reilly stopped by Good Morning America on a special occasion for the show – the beginning of Diane Sawyer‘s final week.

O’Reilly’s grades ran the gamut of the alphabet – with a ‘B’ on jobs, ‘C’ on Afghanistan and ‘D’ on health care.

Regarding jobs, O’Reilly had some positive words for the President. “It’s very, very encouraging that the unemployment rate went down, even though it is around to the Christmas/Hanukkah season,” he said. “We had chaos, and Obama stepped in and he did a lot of things that people criticized him for, but I think he stabilized the economy to some extent.”

On Afghanistan, he reiterated how much he didn’t like the speech last week at West Point, but didn’t fall into the same trap of other “ideologues” who had a problem with the deadline set. “Everybody knows that if it’s not going well at that juncture, he’s not going to pull them out,” said O’Reilly. As for health care, well O’Reilly just wants someone to explain to him the plan.

At the beginning of this morning’s show, Sawyer made the announcement it was her last week. “We wanted you to know that this is going to be my last week after 10 years here at Good Mornign America, side-by-side,” she said.

“You really are giving up your day job, finally after all this time,” joked co-anchor Robin Roberts. All week the show will use “watercooler” segments to talk about some of Sawyer’s most memorable moments on the show.

Roberts brought up the fact that Sawyer was leaving at the end of the week during her interview with O’Reilly. He gave the team a ‘B+’ “just for getting up.” But he joked: “That’s what you start with. If you do anything intelligent in three hours it bumps to the A.”