Bill O’Reilly Grills Dick Cheney on Iraq: ‘What Did We Get Out of It?’
video

Bill O’Reilly Grills Dick Cheney on Iraq: ‘What Did We Get Out of It?’ 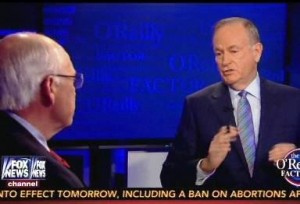 Bill O’Reilly squared off with former Vice President Dick Cheney for the first time on Monday night, and rather than asking for Cheney’s take on President Obama, O’Reilly spent the first segment of the interview pressing Cheney on whether U.S. intervention in Iraq and Afghanistan was really worth it in retrospect.

Cheney repeatedly claimed that the Bush administration had a clear plan for after their successors took over, but that the Obama administration ended up not following through and so in Iraq, for one, the “level of violence has escalated significantly.”

O’Reilly, however, admitted he didn’t believe going into Iraq in the first place was the best idea.

“We spent a trillion dollars on this with a lot of pain and suffering on the American military. What did we get out of it?”

O’Reilly and Cheney went back and forth on the subject, with O’Reilly telling the former VP “I don’t know if their suffering and blood was worth it.”

O’Reilly also challenged Cheney on the wisdom of getting involved with Afghanistan, saying even after the U.S. intervened, the Taliban may “make that country a chaotic mess” down the road, and again asked what the U.S. would get out of further intervention. Cheney argued, “We don’t have the choice anymore… of crawling back behind our oceans and saying what happens out there doesn’t affect us.”