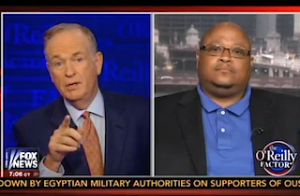 Bill O’Reilly opened his show Tuesday night by laying out his defense for the controversial “stop-and-frisk” program in New York City, arguing that it would be “madness” for the NYPD to stop using it. From there, he invited Nathanial Pendleton, father of murdered Chicago teen Hadiya Pendleton, on to explain why even after his daughter was shot and killed, he doesn’t want his city to adopt “stop-and-frisk.”

“Throwing out stop-and-frisk would be madness,” O’Reilly said in his “Talking Points Memo” segment. As an example hie pointed to Chicago. “The violence there could be stopped,” he argued, “by flooding the zone with police on literally every corner of dangerous neighborhoods. But if the city did that, you would hear the howls of indignation from the racial hustlers, who would rather see kids die than admit there is an acute social and criminal problem in many poor precincts.”

Pendleton began by saying unequivocally, “Stop-and-frisk against minorities is totally unfair.” He said, “I think tougher gun laws is a much better deterrent than just making people, pulling, criminalizing people for what you may think this guy may have–” O’Reilly pushed him to “reconsider” his position, saying he has a chance to “cut this kind madness down,” but Pendleton countered, “I can’t reconsider, because it could be a lot of innocent, young men being criminalized for walking up the street.”

By the end of the interview, Pendleton admitted that Chicago has gun laws that are in many ways just as tough as New York, but he attributed the much higher murder rate to a lack of enforcement of those laws. He said that putting gun offenders in jail for a minimum of three years and “making examples of them, goes a whole lot further than just pulling everyone over saying ‘I’m going to frisk you.'”