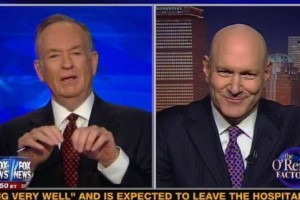 What’s the deal with that video with the South Korean guy dancing on an invisible horse like he’s in Monty Python or something? Well, not to worry, Bill O’Reilly is on the case! This ‘Gangnam Style’ video has been the latest, greatest craze to hit the internet, and not only is it the most-watched YouTube video of all time, but it is on its way to getting a billion views. So it’s about time O’Reilly and Fox News resident psychiatrist Keith Ablow analyzed what the hell all of this is about.

Their first conclusion? The whole thing is madness! O’Reilly can’t figure out why a guy “doing the pony” is so popular with people. Ablow said Psy may be tapping into something. That something? Nothing. Yes, in Ablow’s opinion, people enjoy listening to something that doesn’t try to say anything or make a point about anything appeals to people. Plus, it is “without intelligible words, to some extent.”

Well, first of all, it’s in another language, so I think that might explain it. But second of all, even the most basic of research on the video reveals that it actually DOES have a message. The whole point of the video was for Psy to satirize the lifestyles of Gangnam residents, because Gangnam is quite a ritzy neighborhood in South Korea.

But yet, O’Reilly and Ablow continued along the “it means nothing” line. O’Reilly quipped that he knows at least sixteen people in Long Island named Sy, while Ablow compared Psy piggybacking on internet trends to how Elvis Presley capitalized on the sexual culture during his era.

O’Reilly declared Psy to be a “fat little guy… jumping up and down,” and admitted there’s not really anything wrong with the video since, “you might lose a few pounds jumping up and down like a pony.” But Ablow warned that a video like this might be a problem if people continue watching it in order to distance themselves from reality.

There are really no words to fully encapsulate how hysterical this segment is, so just watch it below, courtesy of Fox News.