Bill O’Reilly: How Will Historians Judge The Obama Presidency?
video

Bill O’Reilly: How Will Historians Judge The Obama Presidency? 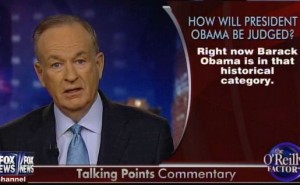 Bill O’Reilly tonight asked the question of how President Obama will be judged in the pages of history. He said that historians will pay no mind to Obama’s charisma or his legislative victories, but instead will judge him on the economy he leaves behind. O’Reilly said that presidents like Herbert Hoover are most remembered for presiding over bad economies, and predicted that Obama will end up in that same historical category.

In the context of the fight over sequestration, O’Reilly said that Obama has no interest in cutting any spending without pairing it with a tax increase, but the Republicans in Congress are not interested in that. He cited statistics showing that estimated total 2013 spending will be $3.6 trillion, but asked why spending is so large, when the economy is not improving, poverty is the same as it was fifty years ago, and salaries for working people are going down.

O’Reilly highlighted the fact that minorities are more in favor of a larger government than the nation at large, arguing that Obama is spending so much money because he is relying on a coalition of African-Americans, Hispanics, organized labor, and liberals that he hopes will overwhelm the Republican party.

O’Reilly predicted that historians will not care about his charisma or his “co-opting of the press,” but will look at the facts. He said the United States is on the road to bankruptcy and Obama will be appropriately blamed and remembered for it, just as Herbert Hoover was.