Bill O’Reilly: I Don’t Know If Hardcore Conservatives Are Wielding The Influence They Once Did
video

Bill O’Reilly: I Don’t Know If Hardcore Conservatives Are Wielding The Influence They Once Did 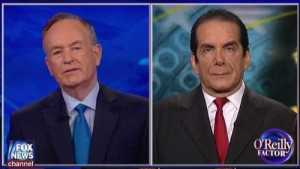 In a discussion Tuesday with Fox News contributor Charles Krauthammer over conservative voter disenchantment with the current GOP presidential field, Bill O’Reilly observed that the era of conservative political influence was on the wane. “The world is changing,” O’Reilly acknowledged. “In the Nevada vote, most people who describe themselves as conservative voted for Mitt Romney. I don’t know if really, hard core conservative Americans are wielding the influence that they once did. For example, in the Reagan era, I think that the changes in the world have made problem solving rise above conservative ideology.”

Krauthammer disagreed with O’Reilly’s analysis that conservative influence had ebbed.

“If you define it in terms of smaller government, not the social issues but sort of the social contract, what does the citizen owe the state and the state owe the citizen? I think there has been a rise of conservatism,” Krauthammer opined. “I think particularly in reaction to Obama and the liberal overreach and Gallup shows twice as many conservatives as liberals in the country. Younger people are less concerned about gay marriage for example, and I think over time that issue will wither away. But on the fundamental issue of what should government do? How big, how wide, how strong it should be, on that there is a very strong conservative majority in the country and overall it will prevail.”