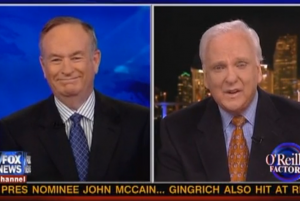 Bernard Goldberg‘s semi-weekly segment on The O’Reilly Factor today focused on the New York Times calling Mitt Romney one of the “whitest” candidates to ever run. Bill O’Reilly began the segment with a joking tease that Goldberg was, in fact, the whitest guy he knew– one that Goldberg took as a challenge, and disputed by brandishing a photo of himself with rapper Ice Cube. “See, here I am with Ice T,” he said, unfortunately.

Yes, Bill O’Reilly just corrected someone else’s knowledge of 90s gangsta rap on national television– which, actually, when you think about all the rappers he has had on his show during its extensive run, shouldn’t be as surprising as it is. Anyway, Goldberg displayed a photo of himself throwing some sort of gang sign up alongside what looked like an NWA-era Ice Cube, and repeated several times that he was standing with Ice-T. “That’s Ice Cube!” O’Reilly corrected, “That’s how white you are! I’m a brother, man! You can’t be doing that to me!”

After a bit of bickering over it Goldberg finally conceded his error, but insisted that his time with Ice Cube was proof that he wasn’t as white as O’Reilly insisted he was. “You didn’t even know who he was!” O’Reilly replied.

They then got to the business of the New York Times, where Goldberg attacked the logic of Romney “not being a racist, but racists love him.” “Isn’t it a shame that we have to be talking about this garbage on [Martin Luther King Day]?” O’Reilly retorted, leaving Goldberg to choose the last word for the segment– “liberals are going to yell racism whenever somebody disagrees with President Obama,” Goldberg concluded.

NOTE: The headline of this story was changed from its original to reflect Ice T’s response to Bill O’Reilly.