Bill O’Reilly: If Romney Were President ‘We Wouldn’t Be In This Mess’
VIDEO

Bill O’Reilly: If Romney Were President ‘We Wouldn’t Be In This Mess’ 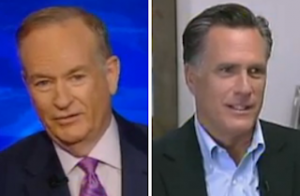 In his first television interview since losing the 2012 presidential election, Mitt Romney told Chris Wallace on Fox News Sunday how much it “kills” him not to be in the White House, “doing what needs to be done” during Washington’s fight over the sequester. Judging from his Talking Points Memo segment Monday night, it’s also killing Bill O’Reilly.

O’Reilly began by comparing President Obama‘s leadership on the sequester to that of Abraham Lincoln, arguing that Lincoln would never have let the sequester happen. But he then turned his attention to the president’s most recent political rival, saying, “If Mitt Romney had defeated President Obama, we wouldn’t be in this mess.” As evidence, he showed a clip from Romney’s Fox interview.

Romney was incredulous in his interview Sunday about the president’s seeming inflexibility on the spending cuts, indicating that perhaps it was more important for Obama to “show pain” and blame it on Republicans than to actually solve the budget issues.

O’Reilly wholeheartedly agreed with Romney, saying all the president cares about it “raising taxes” and “redistributing income,” “everything else be damned.” He also argued that the media is defending Obama’s position, pointing to House Speaker John Boehner‘s interview with David Gregory on Meet The Press Sunday.

But O’Reilly didn’t put much more faith in Boehner or his Democratic counterpart Senator Harry Reid. He evidently sees a leader-less Washington that desperately needs the guiding hand of Mitt Romney to step in and fix everything. While no one is applauding Congress or the president for handling the sequester issue perfectly, isn’t it far too easy for an outsider like Romney who has no more political stakes left in the fight to claim he has all of the answers?