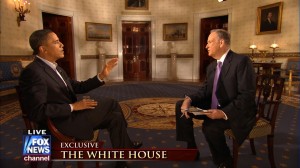 President Barack Obama‘s lively interview with Bill O’Reilly yesterday evening challenged him to answer many questions on some of the biggest issues on the minds of Americans– the crisis in Egypt, the domestic economic situation, and health care reform paramount in their chat. As promised, O’Reilly aired the half of the interview saved for Fox News tonight, and one thing’s for sure– from a media junkie’s perspective, he saved the best for last.

In this half of the interview, O’Reilly pushed the President on America’s relationship with Afghanistan (and its leader, Hamid Karzai) and demanded a substantive answer on the national debt. President Obama responded in kind, with assurance that he still trusted Karzai– or at least “trust[s] that he cares about his country and his relationship with the United States”– and argued that his policies would lead to cutting domestic spending down to Eisenhower-era levels. And with policy out of the way, O’Reilly got to the most fascinating part of the interview– the President’s perception of civility in the media, how much it has been eroding, and Fox News’ role in such.

“I think you gave a great speech on the civility factor,” O’Reilly complimented President Obama, referring to his speech in Tucson, “but I don’t think anyone will listen.” He noted that “there’s a lot of money to be made” from polarization– too much to deter anyone in the media from moving to extremes. He then asked the President to evaluate the damage the media is doing to national discourse. The President’s answer was diplomatic, though expressing obvious frustration. “I think what it does over the long term is it is making it harder and harder for the sensible center to get together to solve problems,” joking that if he has a friendly conversations with Sen. John McCain, “no one is going to report on that.” He also accused the media of forwarding the mentality that “the way I get on the news is if I insult someone,” encouraging many politicians to be rude for the sake of attention.

O’Reilly then turned specifically to his own network and invited some constructive criticism. “What can FNC do better?” he asked the President, prefacing his inquiry with background on the pervasive calls that the network is biased. The President thanked him for the opportunity and went easy on Fox. “The news guys try to do a good job,” he remarked, and advised that “the most important thing that the news– whether its Fox News or MSNBC– can do is give people facts and make sure that people have all the facts.” He noted that he considered the network biased, or at least acknowledged its “point of view,” but added that “there’s nothing wrong with that,” and networks like Fox were a cornerstone of the free press.

Given that the segment of the interview airing during the Super Bowl was meant to reach an audience far larger than that of Fox News (and, as such, vastly different in tastes and temperament), O’Reilly appears to have targeted his questions in a way that perfectly rewards both his regular viewers and the folks watching football that happened upon his interview.

Both segments of the interview aired today via Fox News below: