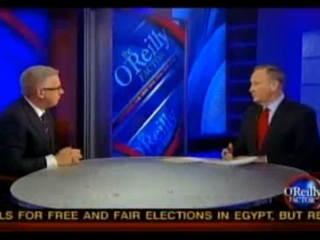 Glenn Beck is sticking strongly to his belief that World War I is an analog to the current configuration of the world. Having called the Egyptian revolts of this weekend our “Archduke Ferdinand” moment earlier today, he took his thesis to a skeptical Bill O’Reilly, who neither agreed with Beck’s proposition to take a neutral stance on the issue nor seemed to agree that the revolts were “orchestrated by the marxists-communists” and the US should stay out of it.

Having moved up Friday’s “At Your Beck and Call” segment to respond to the events of this weekend, O’Reilly opened up his weekly interview in agreement with Beck in at least one thing: Egyptian president Hosni Mubarak is a “bad guy– a really bad guy.” The fork in the road came about who may come after Mubarak. To O’Reilly, it seemed clear that there was a possibility that something similar to the situation in Iran could happen– a reason America should intervene. Beck agreed that it is going to be “very similar” to the Iranian revolution, which O’Reilly called a “catastrophe,” one for which Beck appeared to see the only solution as neutrality. “Why not be Switzerland?”

This set to two down on a road of historical bickering, with Beck insisting we had “never tried it before” and being rebutted with the fact that most Americans opposed involvement in World War II. Beck countered this claim once again by citing Woodrow Wilson and arguing that “we meddled in people’s business and told England to sink their own ships in World War I,” which exasperated O’Reilly into warning Beck to simply stop talking about the 1910s: “stay away from World War I.” They also debated the world’s greatest threat. “I see the jihad as more of a problem than the communists/socialist,” O’Reilly admitted, after Beck had proclaimed that the Egyptian protests were “being orchestrated by the Marxists/communists and the Muslim Brotherhood.” They ultimately agreed to disagree on the neutrality argument, though, more importantly, agreeing to keep some of the squabbling for next week.