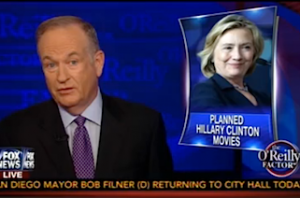 Monday night on The O’Reilly Factor, Bill O’Reilly brought on Juan Williams to discuss the impact of the planned Hillary Clinton film projects from CNN and NBC. Last week, the RNC voted to boycott GOP debates on those networks, if the projects proceed, but O’Reilly doesn’t think it will come to that. Not because the RNC will back down, but because he doesn’t think CNN’s documentary nor NBC’s mini-series will end up getting made.

Williams began by calling the films “free advertising” that will only “elevate” Clinton. He particularly thought the “very attractive and beautiful” Diane Lane, who’s been cast by NBC to play Clinton, would go a long way towards glamorizing the possible 2016 Democratic nominee.

“Didn’t Julianne Moore elevate Sarah Palin on HBO?” O’Reilly asked “sardonically,” playing devil’s advocate and saying seconds later, “no, of course not, she mocked her.” Soon, he was predicting that because of all the controversy surrounding the issue that “neither movie is going to be made before 2016. I don’t think it’s going to happen.” He admitted that the mini-series could deliver some badly-needed high ratings for NBC, but said never-the-less, “it’s way too hot.”

O’Reilly argued that “NBC is already labeled a far-left network” and pointed out that NBC Nightly News, the Today Show and Meet The Press are all losing ratings. But instead of these being compelling reasons for NBC to run the Clinton mini-series, O’Reilly said, “They don’t need it.”

Williams countered by saying the networks have every reason to move forward. “Hillary Clinton is very popular and very controversial,” he said. “Even conservatives would watch.”