Bill O’Reilly: Mitt Romney Is Not As Conservative As Newt Gingrich
Video

Bill O’Reilly: Mitt Romney Is Not As Conservative As Newt Gingrich 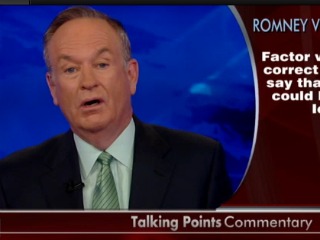 Thursday evening, The Factor host Bill O’Reilly took a look at “the upcoming Romney-Gingrich shootout” to come in Iowa, thus continuing the idea that Mitt Romney is essentially the candidate to beat, and that former Speaker Newt Gingrich is his main (or only?) competition.

O’Reilly said that while “anything can happen in Iowa,” the reality today is that “the trend line is way up for Newt Gingrich, way down for Herman Cain and declining somewhat for Mitt Romney.” He cited a recent Rasmussen Poll showing that Gingrich has 38 percent support versus 17 percent for Romney. The host then noted that this has caused some “angst” within the Romney camp, pointing to the candidate’s apparent irritation over questions asked during his interview with Fox News’ Bret Baier.

He added that Romney is “right to be frustrated” given the veritable carousel of rival candidates that have taken their turns at the top of the polls alongside him.

O’Reilly felt that Romney’s “testiness” could be a positive if he channels this into aggressively “promoting his vision.” Then again, it could prove to be a negative if he comes across as merely “petulant.”

O’Reilly moved on to Gingrich, calling his former Fox News colleague’s campaign “untraditional” in that he was using cable TV news – primarily Fox News – to get his message out to voters. Both Romney and Gingrich, he added, have done well in the debates, although Romney is “not as conservative as Gingrich.” …Which is an idea very likely to be met with some disagreement, with Gingrich’s stance on immigration as compared to Romney’s being one example to counter O’Reilly’s assessment. And, yesterday, fellow candidate Ron Paul flat-out told radio host Laura Ingraham that he would not place Gingrich in the category of “conservative.”

That said, O’Reilly noted, “President Obama would rather run against Gingrich than Romney, because the governor is likely to rally broader support,” including independents and more “conservative democrats.”

Do you agree with O’Reilly assessment? Think we’ll see any upsets in Iowa?