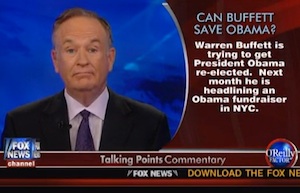 In Bill O’Reilly‘s “Talking Points” segment last night, the self-described “traditionalist” openly expressed his dissonant views on the recent actions of super-wealthy free market genius Warren Buffet. On one hand O”Reilly expressed deep respect for Buffett’s investment acumen and fiduciary responsibility to his shareholders (of which he is one); and on the other hand he took great exception to the “Oracle of Omaha’s” call for increased taxes on the super wealthy, and his open support of President Obama.

There is no question that Warren Buffett is a financial hero to aspiring capitalists of all political stripes. He is a rather pure free-market genius who, O’Reilly correctly points out, has given to charity an enormous percentage of the billions of dollars he’s made. O’Reilly recognizes this, and gives Buffett proper credit for making his money. But when it comes to Buffett’s call for increased taxes, and his support of Obama, suddenly O’Reilly thinks Buffett is a buffoon for supporting what O’Reilly clearly sees as Obama’s failed economic policies, saying:

Simply put, President Obama’s economic policies have failed. His big government spending spree racked up record debt and employment actually got worse. Mr. Obama’s vision going forward is to level more taxation on the affluent and business owners while his enthusiasm for spending cuts is muted to say the least.

Warren Buffett has to know that. Raising taxes on business people and big spending consumers during tough economic times is very risky. Buffett has to know it. Buffett also has to know that the majority of Americans are losing faith. According to a new Rasmussen poll, just 14 percent of likely voters say the country is heading in the right direction. An astounding 79 percent believe the USA is on the wrong path, and that number has to include many Democrats.

O’Reilly’s thinking is that increased deficit spending has clearly racked up debt and made unemployment figures worse than before Obama took office. Its as clear to anyone who sees the horizon before them and can immediately tell that the earth is flat, right? Wrong.

According to a weekend report by the AP, the record debt problems were not caused by record spending, but rather have been caused by a weak economy (one that started to crumble in the twilight of the Bush administration.) To Obama’s credit, he has blamed both parties for the fiscal irresponsibility of the last ten years (and not just “blame Bush,” as many conservative pundits like to claim in their own unique shorthand).

Quibbles with the AP report aside, there are many fiscally conservatives individuals who happen to agree. In fact, David Stockman, the chief architect of Reagonomics, has made the very same point, as have two guests on “The Factor” from earlier in the week – a point that supports O’Reilly’s willingness to present independent thought on his program.