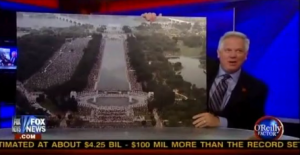 Glenn Beck continued his post-rally victory lap last night on the The O’Reilly Factor. While he and Bill O’Reilly did address some of the criticism Beck and the rally received, it was mostly a happy affair culminating in Beck presenting O’Reilly with a blown up picture of the massive Saturday crowds “for [his] wallet.” The two discussed the message of the event as well as a certain wager they made…

Most importantly, the two used the time to clarify the point of Beck’s speech and what he wants from the country:

O’Reilly questioned him about all of this as well as promising to defend him against the many attacks he’ll receive from “the other side.” Beck reminded him of his bet to let Beck host the Factor if the crowds surpassed 100,000 and O’Reilly told him he could but joked that the crowd wouldn’t have been half as big had it not been for the Bold and Fresh Tour.

Interestingly, Beck made a point, despite the many mentions of Judeo-Christian beliefs in the segment, of noting that he included Imams amongst the spiritual leaders invited on the stage as part of his Black Robe Brigade and that he had respected friends who were atheists, namely Penn Jillette. While many may disagree strongly with Beck’s political beliefs, this boiled down message was pretty palatable.

And besides, who wouldn’t want to hang out with Beck and Penn and Teller. I guess O’Reilly can come too.