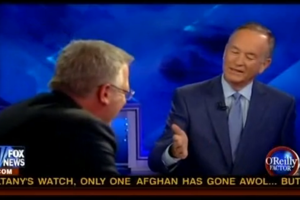 Who would have pegged Bill O’Reilly as a peacemaker as recently as a year ago? The Factor host had his weekly sparring session with colleague Glenn Beck last night and, after fretting a bit about Beck’s newfound love of academia and calling his Lindsay Lohan fingernails “infantile,” offered to help broker peace between Beck and Malik Zulu Shabazz, the chairman of the New Black Panther Party.

The conversation touched a number of topics, not the least of which is Beck University, which O’Reilly seemed a bit hesitant about given Beck’s new claim that, as an honorary doctor of humanities, he is prepared to perform surgeries. “I’m thinking of offering free surgery for $9.95 a month, but only for Black Panther members,” he joked. “Beck, you’re babbling,” O’Reilly grumbled, after warning queasily that Beck should probably not “put your hands in anybody’s mouth.”

The banter continued with the case of Shabazz, who both Beck and O’Reilly have interviewed in the past. “It’s like talking to a vacant lot… with all due respect to Mr. Shabazz,” O’Reilly joked. Meanwhile, Beck was mildly offended that O’Reilly would want to see Shabazz on Beck’s show when he had such little interest in Shabazz himself– “I don’t want your sloppy seconds!”

Beck also showed off his “No Ratings” nail polish inspired by Lindsay Lohan and cried for MSNBC once again, a move O’Reilly called “infantile” as he complained that he couldn’t even read Beck’s hands because “your hands are so appalling.” Beck, clearly hurt, replied, “How could you say that to the dean of one of the most prestigious universities in this room?”