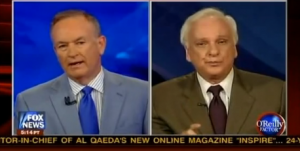 Fox News is certainly enjoying watching the rest of the media begin to pick up the DOJ Black Panther story. On The Factor tonight, Bill O’Reilly and Bernie Goldberg started discussing how the likes of Bob Scheiffer and Howard Kurtz could have missed and dismissed the story so thoroughly. The conversation quickly devolved into about five minutes of gloating from the nation’s top rated news network.

It started to go downhill as Goldberg began seemingly blaming most of society’s ills on that greatest of all evils, the New York Times. Then the self-congratulating began as the two men started pointing out just how dominant Fox had become:

O’Reilly: My contention, and I think your contention, is that we report the news better, better, certainly than CNN which is going right down the drain. And the Washington Post, which misses story after story after story, seemingly because of ideological reasons. You know, so I guess Kurtz is just not getting that.
Goldberg: I want to emphasize, he’s still better than the bozos that cover the media for lots of other papers. Having said that, we’re in a transition period. The old media isn’t totally dead yet but it’s dying. It really is dying and Howard still thinks, I guess, that the the Washington Post, the New York Times, the networks, that’s the mainstream and Fox is not the mainstream. Here’s the news, here’s the news. No, no, Fox has become the mainstream in America.
O’Reilly: Well, there’s a new sheriff in town and I’m going to have to arrest Howard Kurtz.

Wait, so Fox News is the mainstream? Does that mean no one on the channel (including Sarah Palin) can bad mouth the mainstream media anymore? Seriously though, you guys may have been right about covering the DOJ story when few else were, still doesn’t mean there’s any reason for a five minute back-patting session.