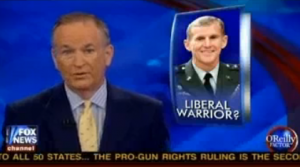 Last night on his show, Bill O’Reilly and Bernie Goldberg discussed the case of Gen. Stanley McChrystal. Neither O’Reilly nor Goldberg could figure out why Gen. McChrystal would be foolish enough to fall into the trap of big bad Rolling Stones reporter Michael Hastings who O’Reilly charmingly described as a “weasel with a capital ‘W.'” Finally though, the Factor host came up with a bulletproof theory: the reason McChrystal said all of those mean things about the Obama administration was because he’s secretly a liberal! Of course!

O’Reilly’s theory came from an article in The Atlantic that posits that Gen. McChrystal wasn’t just a social liberal, but a social liberal who…cue the dramatic music…doesn’t like Fox News. Of course that would lead to his downfall.

Here’s what O’Reilly had to say after showing the comments from CBS’ Lara Logan:

“I think Lara Logan is discounting the ideology of General McChrystal because that’s the only explanation. I don’t know anything about McChrystal. I’ve never met him. I’ve met the other generals, Odierno and Casey, all of those guys. When I was in Afghanistan, McChrystal obviously wasn’t there. I don’t know his ideology but, when I heard he was an avowed liberal who turned off Fox News in his office- which, as you know, is the most widely watched network on all Army and Marine and Naval bases all over the world by far. It’s Fox News, Fox News, Fox News. When he did that and I heard that, I went, ‘Ok. Maybe his own ideology brought him down.’ I wonder if Gen. McChrystal is as liberal now, today, as he was before the Rolling Stone article. So I think, you live by the liberal sword, you die by the liberal sword.”

What does this even mean? Why would being a liberal cause someone to sass talk a Democratic administration? Do left-leaning people love Rolling Stone so much that they’d hurt their own job security? Sure, those Hunter S. Thompson articles were cool, but that was a while ago, wasn’t it?