Bill O’Reilly On Joy Behar: ‘She Was Yapping, So I Had To Get Her Attention’ 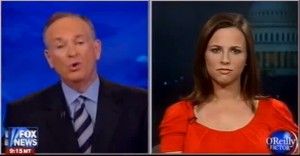 As the media continue to argue the case of Joy Behar, Whoopi Golberg v. Bill O’Reilly, O’Reilly continued to defend himself on his own program. Alicia Menendez of the “center-left” think tank NDN visited The O’Reilly Factor last night, where she accused O’Reilly of having been a rude guest on The View. O’Reilly explained: “I was going to educate Ms. Behar…she was yapping, so I had to get her attention.”

Confessing his meager knowledge of fruits, he told Menendez that he doesn’t know about “apples or oranges or bananas or grapes,” but that he does know:

One group attacked us on 9/11 and, believe me when I tell you, most Muslims didn’t want that. …[But the groups responsible for 9/11] are all Muslims. Every one of them. … I didn’t mean to denigrate the Muslim religion, but I aptly described who attacked us on 9/11, causing two very liberal women to walk off the set.

The two then continued to tussle over some high arithmetic:

AM: How much skin off your hide is it to really say that this was a small fraction of the [Muslim] people.
BO: How many times do I have to say it?
AM: A million. A bazillion!
BO: I have to say it a gazillion times.

Watch the following clip from Fox News’ The O’Reilly Factor to see the rest of the debate.