Bill O’Reilly On New Allegation: ‘I Don’t Think Herman Cain Can Survive Any More Of This’

O'Reilly On New Allegation: I Don't Think Cain Can Survive Any More Of This
Twitter share button 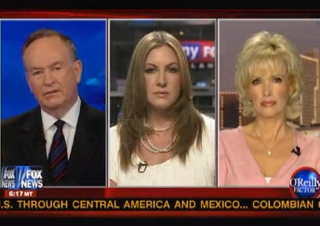 While Newt Gingrich‘s unexpected rise to the top of the Republican primary ladder had taken the spotlight off of the numerous sexual allegations against Herman Cain for some time, but that problem came barreling back into headlines today as Cain himself broke the news of a new accusation: a thirteen-year affair. On tonight’s Factor, Bill O’Reilly had some pessimistic remarks on the matter, wondering whether “Herman Cain can survive any more of this.”

Joined by panelists Leslie Marshall and Janine Turner, O’Reilly noted that on his program they were “not going to get into this,” meaning the details of the affair, but did note it “is a legitimate question” whether “Herman Cain can survive any more of this.” The panelists expressed the same concern, as Turner noted that “especially in a conservative race, it’s going to be tough,” but that “we’ve had wonderful leaders throughout the course of our history that were great thinkers… that had affairs.” Marshall had a more optimistic approach, noting that things look bad but “between now and November 2012 is a lifetime in politics.”

“It takes him away from what his points are,” O’Reilly insisted, “puts him on the defensive everywhere.” He noted that he felt bad for Cain because “there are a lot of Americans, unfortunately, that will convict you on a headline,” but that he felt the campaign at “upended.”