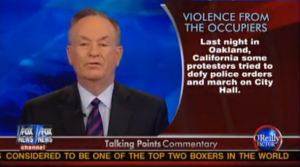 On his program Wednesday, Bill O’Reilly took a look at the violence that occurred during Occupy Oakland protesters’ attempt to march on City Hall, adding that the protest had grown increasingly antisemitic (although, in all fairness, he showed a clip of solely one protester making disparaging remarks about Jewish people). O’Reilly then shared the results of a new CBS / New York Times poll showing that 43 percent of Americans support the Occupy movement, with 27 percent showing disagreement, and 30 percent reporting that they were unsure about it.

O’Reilly was visibly upset, however, with another poll showing that 66 percent of Americans feel money and wealth are not “distributed fairly” in the United States.

Well, a key word in that question is “distributed,” because wealth is not distributed in America. There’s no central authority that doles out salaries and investment returns. You either earn it, steal it, inherit it, or win the lottery. There’s no distribution. The problem is that many Americans simply don’t understand what’s at stake here. The Occupy Wall Street movement is basically socialistic. It essentially wants the government to control who gets what.

There’s no question that capitalism isn’t perfect or fair. Some people who get wealthy do so by exploiting workers; that’s always happened. But the alternative is Cuba. Or Greece. Do Americans really want that?