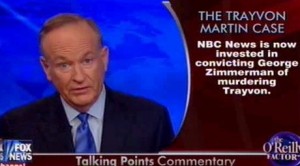 NBC has not exactly gotten the best press for its coverage of the Trayvon Martin story. The network broadcast an edited version of George Zimmerman‘s 911 call that left out crucial context, and questions have been raised about Al Sharpton‘s activism on the case while still working under NBC’s corporate umbrella. On his show tonight, Bill O’Reilly contrasted NBC’s coverage with ABC’s, giving much credit to the latter.

O’Reilly noted that NBC and ABC were “covering the case in completely different ways.” According to O’Reilly, the network has covered the Martin case 42 times since mid-March, and he brought up the new evidence unveiled by ABC News: a photo of Zimmerman’s bloodied head following his struggle with Martin. For these reasons, O’Reilly gave much credit to ABC for treating the case like the hard news story it is and not allowing commentary to desaturate the value of their reporting on the subject. However, he could not say the same for NBC.

O’Reilly accused NBC of being “invested in” trying to get Zimmerman convicted of murdering Martin before the trial even begins. However, in trying to support his theory that NBC News, specifically, is trying to do so, O’Reilly ran a clip montage of MSNBC pundits covering the case. O’Reilly warned NBC, and indeed, any network covering the Martin case, that the media is not a courtroom, and the facts will not be presented fairly if every little detail is sensationalized.

“It is very dangerous for any news operation to try a criminal case on television. But that is what NBC has chosen to do, through its cable arm, MSNBC. In the process, a heavy racial component has been introduced into the case, and if Mr. Zimmerman is not convicted, violence is certainly possible.”

RELATED: Bernie Goldberg To O’Reilly: NBC Should ‘Cut Their Relationship’ With ‘Irresponsible’ MSNBC

O’Reilly refused to wade into the waters of rampant speculation, insisting the responsibilities of seeing the case through now lie with the Florida court. He shared some interesting information about the British legal system, and how the courts in England can legally prevent the media from covering a case if it thinks the coverage will affect the courtroom proceedings. O’Reilly once again called for “restraint” in the case until all the facts come in.