O’Reilly Rips Liberals Over Gun Control: ‘The Government Can’t Protect Us From Monsters’ 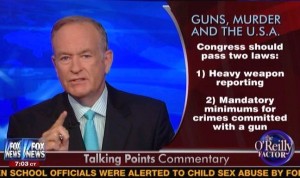 After a weekend of mostly responsible reporting on the Colorado shooting, it’s time for cable news to get back to doing what it does best: telling viewers who is hurting America today. And on his show tonight, Bill O’Reilly tore into “far-left ideologues” using the opportunity to call for more gun control laws, specifically calling out PBS journalist Bill Moyers, who called the NRA an “enabler of death.” O’Reilly said Moyers’ comments were “so dumb it hurts.”

O’Reilly claimed that in Chicago, a city that banned handguns in public, there were over 1000 shootings this year, and that New York City police confiscated nearly 4000 guns in the past year despite its gun laws. He claimed that Moyers’ solution to that would be to “let non-violent criminals out, like heroin dealers.”

However, O’Reilly then said that anyone who sells heavy weapons or ammunition within the United States should be required to report it to the FBI, because it “just makes sense in this age of terrorism.” He said it’s “insane” that terrorists could come into the United States, buy bazookas, and the FBI would not know about it. O’Reilly offered up two suggestions to place certain checks on gun ownership: heavy weapon reporting, and mandatory minimums for anyone who is found committing a crime with a gun.

He ended the segment by scolding liberals for thinking that gun control laws will make people safer.

“The truth is, criminals will always get guns. Always. So why do the far-left loons want to take guns away from law-abiding citizens who want protection? The authorities can’t protect us. They react after we’re shot… Folks know the government can’t protect us from monsters like James Holmes in Colorado.”