Bill O’Reilly: Ron Paul’s Support Is The ‘Most Emotional’ In The Race, ‘Almost A Cult’ 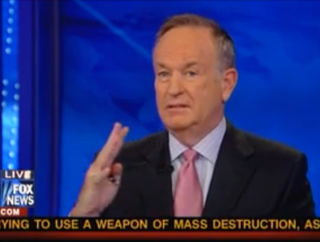 With the Herman Cain candidacy increasingly in jeopardy, on tonight’s program Bill O’Reilly asked guests Alan Colmes and Monica Crowley to gauge the rest of the field, of which neither seemed particularly excited. In discussing the lack of emotion surrounding Rick Perry, O’Reilly argued that Cain and Rep. Ron Paul had the “most emotional support,” particularly the latter, whose supporters he compared to “bees.”

RELATED: Fox News’ Tantaros: If Ron Paul Won’t Support A GOP Candidate, They Should Take Him Out Of The Debates

Discussing who could potentially benefit from Cain falling in the polls, the panel turned to Rick Perry, but O’Reilly saw something lacking in his support as the campaign went on. To contrast, he argued that “the two candidates that have the most emotional support are Ron Paul and Herman Cain,” and gave as an example the response on a radio poll to Rep. Paul yesterday that he saw: “Ron Paul’s support is almost a cult– we did this presidential forum last night on the radio– they were like bees.”

RELATED: Sex Bomb: Get Your Own Pin-Ups For Ron Paul Calendar

Colmes agreed, adding that Rep. Paul was a “great candidate to have in the debates because he has so much to say that isn’t said by other Republicans,” a point on which O’Reilly also agreed, praising Rep. Paul for bringing “pizzazz” to the debates. Compare that to Perry or Mitt Romney, argued O’Reilly, and it difficult to find similar passion.

Crowley agreed, but didn’t think emotion was so much of a factor when people go to the primary polls this year as it has been in the past. The question voters will ask themselves, she proposed, was, “Which one of these people can stand up to Barack Obama in a debate and in the general election one year from today?” If that is the question, Colmes concluded, Republicans “may have to go for a technocrat like Romney.”