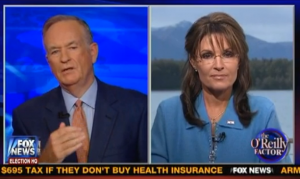 On Tuesday night, Sarah Palin dropped by Bill O’Reilly‘s show to discuss some recent comments by Laura Ingraham, as well as the approach the Romney/Ryan ticket should take in the home stretch of campaigning. Hammering home the argument that Mitt Romney needs to be more aggressive, Palin defined the election as a choice between “free stuff or freedom.”

RELATED: Laura Ingraham To Republicans: ‘If You Can’t Beat Barack Obama… Then Shut Down The Party’

Asked about Ingraham’s remark that if the Republicans can’t win this election, they should shut down the party, Palin, too, agreed that this is a election that should be working in Romney’s favor. Rush Limbaugh similarly said the president’s reelection would signal the end of the GOP. The issue, she said, is that the message is getting across to voters. “If you can’t get your message through that filter of media, then we’re in a world of hurt,” she said.

What Republicans are failing to do, she added, is explain that voters have a choice: “Free stuff or freedom. You cannot have both.” To that point, O’Reilly pondered whether it’s possible the country’s changed. With growing dependency on government programs, he said, perhaps voters will say they want the free stuff. That they’re willing to sacrifice freedom. “It’s possible that we are so far down that road, yes,” Palin replied.

Then speaking more specifically about campaign strategy, O’Reilly questioned whether Romney should go after President Barack Obama “in a more personal way.” Whether he should use “buzz words” like “incompetent,” “dangerous” and “socialist.” Palin argued those aren’t buzz words — they’re the truth. And yes, he should: “He needs to be severely aggressive in his articulation.”

During the convention, O’Reilly remarked that Clint Eastwood was the only speaker who get the president “personally responsible” for the state of the country. It’s “not about policies so much, it’s about him,” O’Reilly said. “He’s a hardcore fill-in-the-blank.”

Have a look at the segment below, via Fox News: