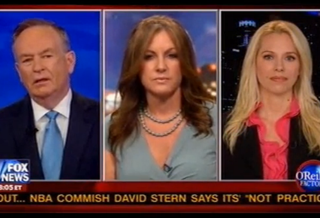 Bill O’Reilly was in rare form last night. After a “Talking Points Memo” segment going after the Occupy Wall Street protests for “demonizing capitalism” and “show[ing] the world the cops are fascists,” O’Reilly welcomed his panel, and refused to let guest Leslie Marshall speak much after she compared the role of George Soros on the left to that of the Koch brothers on the right.

O’Reilly was clearly incensed at the whole matter, narrating the events that led to violence at the Occupy Oakland protests and chastising Oakland’s mayor for “throwing your entire police department under the bus.” He also accused the Occupy movement of lying about its grassroots origins, it instead being a well thought-out plan by the extreme left. He turned to Marshall for her opinion on the matter, and she noted that she believed the idea that Occupy Wall Street was being co-opted by the radical left was a theory that could apply to any grassroots movement with any political ideology. “Every movement is going to be ‘exploited,'” she argued, whether it be “the Koch brothers and the Tea Party on the right, or George Soros and Occupy Wall Street on the left.”

RELATED: O’Reilly On Occupy Wall Street: These Are Loons. These Are Anarchists. You Know, ‘Burn Down The Store’

This was apparently too much for O’Reilly, who asked Marshall to “prove” that the Koch brothers were “tied into the Tea Party financially” (a claim that Marshall didn’t seem to be making, but she didn’t deny making, either). There have been several reports, the most exhaustive from The New Yorker, that make the financial link from the Koch brothers to the Tea Party, but Marshall instead noted that they had contributed money to politicians favorable to the movement, and not to the grassroots itself. Or at least she tried to, before O’Reilly interrupted her half a sentence in.

“You’re a Fox News contributor, you have a responsibility,” he replied, and got her to admit that “with a check in hand” she could not prove a direct donation to a Tea Party organization, but that the ties to politicians favorable to the group were there. This was not enough. “I want to remind you not to make statements you can’t back up on this network,” O’Reilly instructed. “We don’t do that on this network. Other networks do. We don’t.”

Marshall got the worst of it, but wasn’t alone. Professor Caroline Heldman, who sat in silence during this lashing, also got scolded for claiming that “more than half of the American public have a favorable view” of Occupy Wall Street (apparently, a new Fox News poll shows this is no longer true, among people who participate in Fox News polls). O’Reilly, naturally, took full credit for this development: “that’s directly because of my reporting,” he informed Heldman, because, unlike other networks, Fox News was not “hysterical” (someone please notify Don Imus).

On the one hand, there is something commendable about O’Reilly taking off the kid gloves– particularly given that his guests were both women, and, unfortunately, there are still obvious hang-ups in cable news about berating females in a way that may come off as misogynistic. On the other hand, this was the return of Bush-era Bill O’Reilly– the one known for cutting people off, yelling, and generally being belligerent and unpleasant. It was not a pretty sight, and his insistence that Fox News was somehow without the original cable news sin of bending truths was laughable, at best, and unnecessarily opens the entire network up to attack in a fairly irresponsible manner. O’Reilly did return to Marshall and “gave her the last word” (ie talked over her while she attempted to make a final point), and promised to give her air time should she have the facts to back up her claims. This is a rematch that would best happen sooner rather than later.