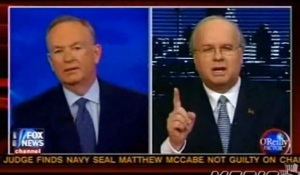 On last night’s O’Reilly Factor host Bill O’Reilly and former Bush adviser Karl Rove got into a heated exchange over immigration reform in this country. O’Reilly seemingly held Rove’s feet to the fire for the Bush Administration’s ineffective policy about this problem. Rove not only defended his and the former administration’s efforts, but shot back at O’Reilly’s critiques, saying, “Easy to say. Hard to do.”

Amidst all the rhetoric and debate over immigration reform currently found on the opinion media outlets is the question of who exactly can be blamed. It’s too early in his term to realistically blame this decade old problem on President Obama, which is a quandary for those looking to score political points AND seal our border. Many of the most ardent supporters of tough immigration policy were also supporters of President Bush.

For example, take O’Reilly – the self-described “traditionalist” who often talks of the evils of “secular progressives” (all the while claiming an Independent political stance.) Back in early 2006, O’Reilly was one of the loudest voices in the “Si Se Puede” era that ran up to the mid-term elections (that was pretty much disastrous for the GOP.) It was one of the first times that O’Reilly was vocally critical of the Bush Administration’s policy. And one of the chief architects of the policy that O’Reilly criticized was…Karl Rove!

There is a lot to enjoy in the spirited debate – in many ways it feels like the nexus point of the debate on the conservative, or traditionalist, side of this issue. But what’s most fascinating about the exchange below (a transcript follows the video clip) is that there are two individuals that were in very different positions back in 2006: Rove was somewhat responsible for exacting change that was a) effective and b) most politically beneficial to President Bush and the GOP. O’Reilly was seeking to touch a nerve with a certain demographic in the name of being entertaining and getting ratings. It appears that on this issue at least, O’Reilly accomplished his mission better than Rove.

Rove: We started the virtual fence.

O’Reilly: That’s a good point I cede that point.

Rove: We doubled the size of the border patrol and tripled the budget. Bush ended 30 years of the practice of catch and release where we took “OTM’s” (other than Mexicans) and released them on their own recognizance and we ended that practice by spending a lot of money.

O’Reilly: Mr. Rove, you guys did some good things.

Rove: And so did president Clinton.

O’Reilly: You were slow. It took me five years to pound you guys into sending to the border. After five years of pounding me did you it that was far too slow.

Rove: I hate to tell you but governors had something.

O’Reilly: I let you had yours. Let me have mine. You were slow to get the guard to the border. That’s a fact. The second thing is, this is the most powerful country on earth. We can control the South Korean border but we can’t control the southern border. You are right. Some sectors, San Diego, some parts of Texas, are virtually impenetrable, they can’t get through, Arizona, New Mexico, other parts of Texas you can imperial county, California. And that is a disgrace for the most powerful country in the world. The federal government can do this. Go.

Rove: Bill, you know, your analogy that we are like north and South Korea, armed states, we aren’t. We aren’t north and South Korea. We have millions of people south of the border who are trying to come a cross a very long and very porous border. It’s gotten a lot tougher. Give the border patrol and the government some confidence that they’re doing a better job.

O’Reilly: I will give the border patrol but I will not give the federal government. It should have been done a long time ago. What is — is Obama sealing that border now? I don’t think he is.

O’Reilly: Well, we will report that —

Rove: Let me finish, Bill. They have stopped, I understand, the building of the fence in Arizona. The physical fence, which has proved to be one of the better things to help us.

O’Reilly: We will investigate that and find out. Look, the frustration that I and millions of my viewers tonight feel is that we don’t want to be persecuting Hispanic Americans or pulling them over and the cops certainly don’t want to be chasing gardeners and house painters around. But the federal government of the United States has an obligation to protect us. They have not done it can you seal down a border. It is possible and doable. But it hasn’t been done. I will give you the last word.

Rove: Bill, yeah. Bill, look, it does require you to do things that we may not want to do.

O’Reilly: Yeah. Do them.

Rove: National identification card for everybody.

Rove: You saw the trouble we got into. We spend years trying to get driver’s licenses with biometrics in it and we have got eight states that won’t participate in them today.

Rove: Easy to say. Hard to do.

O’Reilly: Complicated problems are hard. It’s not easy. It has got to stop. We are at a juncture in our history. It’s got to stop. Mr. Rove always good to see you. Buy Karl’s book. It’s a big best seller. We appreciate it.