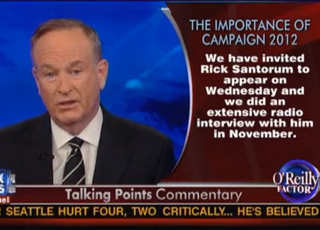 Bill O’Reilly was back after his vacation for the first program of the year, and he had some unfinished business to tend to with Rick Santorum. The latter attacked O’Reilly on the radio today, suggesting that he was banned from the Factor. O’Reilly responded by reminding Santorum that he wasn’t exactly a star in the polls before this week but, now that he was, he was more than welcome to appear on the program on Wednesday.

RELATED: Rick Santorum Accuses Bill O’Reilly Of Refusing To Interview Him Because He ‘Wasn’t Worthy’

O’Reilly had two candidates at the fore of his “Talking Points Memo” segment today, the first, of course, Santorum. He noted the comments Santorum had made and did not directly attack him for them, explaining that “we tend to avoid campaign segments unless there’s a media controversy” and that Santorum had been polling abysmally for most of the race. But now that he was a serious contender for the Iowa caucus victory, “we have invited Rick Santorum to appear on Wednesday.” O’Reilly also added that “we did do an extensive interview with him on the radio in November.”

O’Reilly then turned to the other potential victory in Iowa tomorrow, Rep. Ron Paul, and threw some water on the hot claims that Rep. Paul could take the nomination, not the least because Rep. Paul, in O’Reilly’s eyes, was a Congressional failure. “He has spent 23 years in Congress and only one of his proposed bills have been signed into law,” O’Reilly argued, adding that “Mr. Paul has sponsored 620 pieces of legislation.” While he did not blame Rep. Paul supporters for their opinion of the government, he did not think the candidate would be “nominated by the Republican Party simply because President Obama would beat Mr. Paul by a colossal margin– hello, Barry Goldwater.”