Bill O’Reilly Debunks Obama Myths: He ‘Does Have A Legitimate Birth Certificate’ 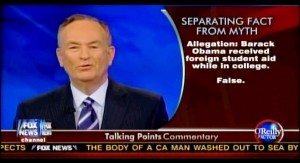 Bill O’Reilly opened his show tonight eager to debunk many myths about President Obama. One by one, O’Reilly tackled various allegations about Obama’s past in an effort to eliminate all of these issues once and for all. While O’Reilly confirmed that some claims are actually true, Donald Trump certainly will not be happy with at least one O’Reilly conclusion.

O’Reilly summarized about Obama that his academic transcripts from college and law school, his medical records and a list of clients he represented while practicing law, are all documents that have not been publicly released. Additionally, according to O’Reilly, there is no record of Obama ever being baptized. However, Obama never wrote a thesis paper so any claims regarding it being kept secret are untrue. Additionally, O’Reilly reports that First Lady Michelle Obama did not lose her law license and does not have more assistants than any prior First Lady. Finally, and Trump may want to cover his ears for this one, O’Reilly declares:

“We’re going to put this to bed tonight. He does have a legitimate birth certificate. The state of Hawaii says they have it. And we have no reason not to believe that.”

Monica Crowley was somewhat placated by this exercise, yet she still wanted to know who paid for Obama’s education. Crowley also worried that with so much secrecy regarding Obama’s past, “the impression is we gave the keys to the kingdom to a stranger.” Alan Colmes argued all of these theories about Obama’s past are simply about delegitimizing Obama as President. O’Reilly agreed, but was hopeful his “no spin” assessment of the allegations would help eliminate them from continued speculation.