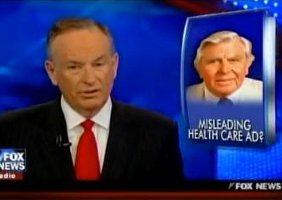 When you think “Andy Griffith,” one of the first things you associate with that name may well be “All-American.” The iconic Andy Griffith Show, its fictional setting of Mayberry, N.C. that’s become shorthand for small-town utopia…even Griffith’s picture on his Wikipedia page is him getting the Presidential Medal of Freedom, for crying out loud. So why’d Bill O’Reilly take issue with him on the Factor last night?

O’Reilly’s beef centered around a pro-health-care-reform ad Griffith shot for the Obama administration; specifically, this claim:

“This year, like always, we’ll have our guaranteed benefits.”

The problem: the site FactCheck.org took issue with that claim, and a White House blog post that discussed the ad when it was released. That post said, “Under the Affordable Care Act…Seniors’ guaranteed Medicare benefits will remain the same.”

But, FactCheck said, not exactly: “As we wrote most recently last December, about 10 million Medicare Advantage recipients could see their extra benefits reduced by an average of $43 per month, according to the Congressional Budget Office.” O’Reilly took this and ran with it, discussing the matter with Fox News contributors Ellis Henican and Leslie Marshall.

Neither Henican nor Marshall seemed too outraged over the ad, but going against O’Reilly when he has a non-partisan fact-checker on his side – and is clearly relishing every moment – is a tough battle to fight. One thing we’ll say, though – this ad came out four months ago (Check the date on this post again.) Why no segment on it back then? In any case, video of last night’s segment below.