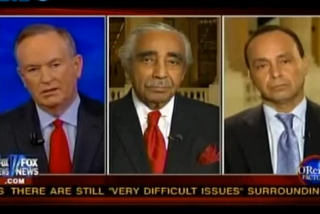 Just because Wisconsin has become the epicenter of the war between unions and cost-cutting Republicans doesn’t mean the rest of the country is standing on the sidelines. In fact, some of those most passionate about the subject are far from having a stake in that state. Take, for example, the two Democratic Congressmen Bill O’Reilly invited on the program to explain the protesters’ plight: Reps. Luis Gutierrez of Illinois and Charlie Rangel of New York, who see the unions as indispensable.

Though O’Reilly referred to himself repeatedly as a “union guy” throughout the debate, it was clear from the beginning that his view on how involved unions should be in negotiating contracts fell far from what Reps. Rangel and Gutierrez believed. To Gutierrez, the debate in Wisconsin was not about benefits, but about redistributing the burden of straightening out our economy. “We all need to share in the restructuring of the budget,” he argued. “Who else is sharing this burden [besides the workers]? The burden should belong to everyone.” Rangel agreed, adding that the biggest concern for him was that he perceived a “move to try to destroy the unions” in Wisconsin that could spread elsewhere, such that collective bargaining creates private-sector benefits that are far fewer than what he perceives to be appropriate.

O’Reilly countered with the examples of Florida and Texas, that had far diminished the power of the unions and, in his eyes, benefited from that. Florida and Texas enjoy the benefits of what is happening in northern states because they set a standard,” Rangel countered, to which O’Reilly found himself answering only “What!?”

“They threw the unions out in a lot of those states!” O’Reilly protested, and until being countered with protests from both Congressmen that taxes were necessary to keep the burden softer, he challenged them to legislate a solution. “Let’s stop the nonsense and you guys introduce legislation to put a flat tax on corporations,” he suggested. When Rangel protested that Republicans would make that difficult, O’Reilly noted that the Republican majority in the House was a new thing. “You had a Democratic House, a Democratic Senate, a Democratic president, and you did nada… now you’re blaming the Wall Street people.”

His conversation with Rep. Gutierrez was far less heated, though he asked the Congressman to explain why the population of Chicago kept falling and those of Texas and Florida increased. “They benefit from the 100 year legacy [of unions],” he explained, a point to which O’Reilly temporarily ceded.