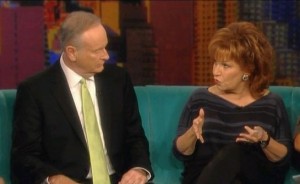 Bill O’Reilly stopped by The View today to promote his new book Killing Kennedy, but during his first segment on the show, O’Reilly talked about the two big political debates last week: President Obama facing off with Mitt Romney for the first time, and O’Reilly himself debating Jon Stewart in their big rumble. O’Reilly said that he enjoyed his debate, while predicting the next presidential faceoff would not be as interesting as the first one and most likely end in a stalemate.

RELATED: Bernie Goldberg On The Rumble: Media ‘Willing To Tolerate’ O’Reilly Because They Love Jon Stewart

Barbara Walters opened by asking O’Reilly about his rumble with Stewart. O’Reilly joked that Stewart was hospitalized following the debate, but admitted that he enjoyed it. He said it was an important discussion between the two of them about the role of government in people’s lives, contrasting Stewart’s approach to government with his belief in a non-intrusive government. On the question of social issues, O’Reilly said the government needs to carefully weigh privacy issues against protective ones.

After watching a few highlights from the rumble, Sherri Shepherd asked O’Reilly about the next debate between Obama and Romney. O’Reilly said that Romney has momentum now, but downplayed the importance of the second debate due to the town hall format. He argued that the format allows them to say “whatever they want,” adding that Obama needs to bolster his credibility as opposed to his likability.

O’Reilly predicted the debate will end up in a stalemate, though he did say Obama may run into some trouble when they get around to foreign policy. Whoopi Goldberg wondered if Romney would be haunted by his past comments that Russia is the United States’ biggest geopolitical foe. O’Reilly doubted it, saying the Russian American vote will most likely not make or break the race.