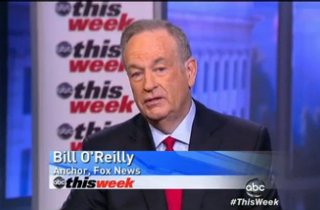 Fox News host Bill O’Reilly appeared on ABC’s This Week this morning to recap his Saturday night “rumble” with Jon Stewart at the George Washington University.

O’Reilly began his appearance by — without naming anyone — scorning those “political assassins” in the media who get paid to be a “hater” on cable, radio, or print and damage the discourse in this country.

He told host George Stephanopoulos that despite some technical glitches, the debate with Stewart went off without a hitch and was a lively “battle between socialism and capitalism.”

Stephanopoulos then asked the Fox personality to assess the upcoming vice presidential debate between Paul Ryan and VP Joe Biden.

“The election is about philosophy,” said O’Reilly. “Just like Stewart and I were debating last night, it’s about direction of the country. Are we going into the western European quasi-socialism, or are we going to get back to robust capitalism? What are we going to do here? The micro is important, but it’s not the dominant theme. Which direction do you want america to go in?” he said.

“It sounds to me then like you agree with James Carville on that point that this is a big election, a clarifying election and whoever wins will have a mandate for quite different approaches,” said Stephanopoulos, referring to Carville’s earlier appearance on This Week.

“Absolutely. Carville is right for the first time in his life,” joked O’Reilly.

“This [election] is huge because we have a lot of Americans who are saying, you know what, I want stuff. I want stuff from Stephanopoulos. He makes a lot of money, give me stuff,” he continued. “Whereas I was raised in my town of you make your own way and, of course, we want safety nets for people who are hurt. Of course. Every fair-minded American wants that, but it’s a philosophy of life that’s in play here.”