Bill O’Reilly: The Economy Is Tanking Because Left And Right Extremists Are ‘Spooking’ Investors 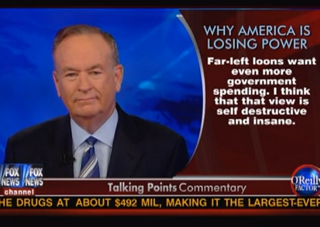 With the debt ceiling talk finally behind the nation, it’s time to focus once again on the fledgling economy and generating jobs once more takes the fore. On tonight’s O’Reilly Factor, Bill O’Reilly turned his attention to the stock market’s decline, and while he lay the majority of the blame on the feet of the Obama administration, argued that extremists in Congress on the left and the right are causing much of the investor skepticism hurting the economy.

O’Reilly used the debt ceiling bill as a launchpad for his “Talking Points Memo” tonight, noting that it saved America’s credit rating, but that “there is little else good in the debt deal and the stock market knows it.” Simply put, he argued, “there is no confidence in the American leadership on the economy. None.” Much of that, he noted, was due to President Obama, but Congress had done its share to cause tension in the market. “Extremists on both sides, the left and the right, are scaring investors,” he noted.

He gave far more time to the “far-left loons” whose “self-destructive and insane” thirst for more government spending was inscrutable to him, but pointed out that those on the right were causing a whole other set of problems. “On the far right,” he said, “there are people who say, ‘Let’s blow up the entire economic system and start all over again.and then theres congress, extremists on both sides, the left and the right, are scaring investors… Extreme views are heard loudly on cable and talk radio and they are spooking the investment community.”

As for the Obama administration, O’Reilly suggested that their actions were driven by the “liberal tenet of social justice,” which defines compassion in some extents and making the government help the poor. Case in point: Obamacare, which O’Reilly argued would damage businesses significantly because so much of their money would now have to be invested in health care. “The world’s financial community doesn’t want the USA to become Sweden… they don’t want the most powerful economic engine on Earth to become a nanny state,” he concluded. While O’Reilly ceded that “sane people know” that regulation is necessary to a certain extent, he implored the Obama administration to “knock off the nanny state lunacy” and let the free market grow.