Bill O’Reilly: ‘The Only Thing That Can Save Obama Is Craziness On The Right’ 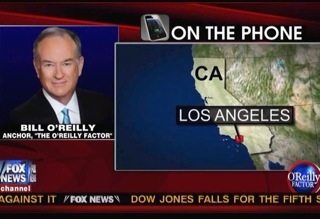 The current debt ceiling debate has found Bill O’Reilly somewhat on the left of where he usually finds himself, warning Republicans and Tea Partiers alike not to interrupt the Democrats as they make their mistakes. Tonight he phoned into the program from Los Angeles, where he warned host Laura Ingraham that, since that this point “the President is taking an enormous hit,” the only thing that could rehabilitate his image is “craziness on the right.”

O’Reilly did not have much good news for the Democrats, as he argued that “President Obama has not shown leadership– that is going to hurt him drastically.” On the debt issue, O’Reilly argued that the folks perceived Democrats “as a party that doesn’t get it,” but that “nobody’s going to win even if a deal gets done.” He refused to predict what the solution would look like– “I can’t tell you what these pinheads will work out”– and concluded that the pessimism the American people were feeling about their leaders’ capacity to govern was the bigger story. “The American public is losing confidence in both parties,” he argued. Ingraham posited that the Republicans were doing better than the Republicans on this story, that they “have gotten the best deal they can with the leverage they have exercised.” O’Reilly agreed, but warned that they could ruin it for themselves if they distracted from the problems created by the Obama administration.

“The only thing that can save Barack Obama at this point is craziness on the right,” O’Reilly concluded. He argued that many on the right were doing more to help the President than hurt him with their antics. “The irony is,” he noted, “the people who dislike President Obama the most– on talk radio or cable news, wherever it is– the people that dislike him the most are helping him the most.” He concluded by pleading that conservatives have “got to stop this hateful rhetoric.”