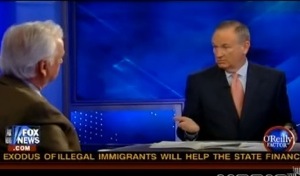 Bill O”Reilly and Bernie Goldberg discussed Supreme Court nominee Elena Kagan last night, or more specifically, Kagan’s brother Irving. O’Reilly thought “the folks ought to know” that “the word in journalistic circles is that the White House is very nervous about Irving Kagan,” ostensibly alluding to a recent story that the White House had denied the NY Times access to Kagan’s family. Goldberg played his part, asking what the President is “trying to hide?” to which O’Reilly concluded “Irving is a left-wing radical.”

The bizarre exchange can really be viewed as an abject lesson in insinuation and innuendo. Some might even call it a smear. As O’Reilly throws questions around the Kagan nomination, he also questions both the Kagan family values (as well as the White House) by looking at Irving Kagan’s resume and deducing that he’s “a big time donor to Democratic causes” as well as a teacher at Hunter College High School in Manhattan. After which, O’Reilly can only chide “we know what that’s about.” No Bill, we don’t. Teaching at a High School does not equate to being a “left-wing radical.”

However, the thrust of the the criticism is really directed towards the White House, which is a fair point. After the Times was denied access to Kagan’s family, the White House released an interview with Elena Kagan that the WH had produced themselves (a move that has received mixed reviews.) This administration has pledged to operate an open White House, though as O’Reilly exclaims “except when it comes to Irving Kagan.”

As if the segment couldn’t get any weirder, O’Reilly concludes the discussion by raising the issue of softball photos, claiming that, even though he hasn’t seen any pictures, “he assumes Irving is a softball player as well.” As the two devolve into giggling adolescents, O’Reilly gets in one last smear at Kagan by jokingly asking Goldberg if he’s a lesbian. “You aren’t are you?”