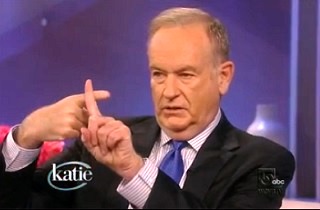 Unfortunately, I haven’t gotten around to reading Killing Jesus yet, but thanks to Katie Couric, I don’t have to in order to know that author and Fox News host Bill O’Reilly is trying to recast Jesus Christ as some sort of anti-tax agitator. On Wednesday’s Katie, O’Reilly explained that Mr. Christ was killed because he “interrupted the tax money flow to the Jewish temple authorities and to Rome” when “he saw the tax collectors dragging the money out of the poor people, and he overturned their tables.”

First and foremost, someone should isolate, and make a ringtone of, Katie Couric chirpily suggesting to O’Reilly “Let’s talk about killing Jesus,” which O’Reilly proceeded to do.

“It is an absolute fact,” O’Reilly said. “He interrupted the tax money flow to the Jewish temple authorities, and to Rome. Once he did that, his fate was sealed.”

“What did you learn about Jesus that was the most stunning thing?” Couric asked.

“How scared he was,” O’Reilly answered. “How frightened he was. He knew what would happen. Rome had the crosses in the ground. Everybody thinks the cross looks like this. It does not, it is a t. The crosses were in the ground to remind people that this is where you are going to end up. Jesus knew what would happen to him if he did not pull back, and he didn’t. The second is how angry he got in the temple when he saw the tax collectors dragging the money out of the poor people, and he overturned their tables, which was a move that sealed his fate.”

My Bible may be a little bit rusty, but I thought Jesus was more of a “render unto Caesar“-type guy. Maybe Bill’s got a point, though. Let’s go to the videotape:

Hmmm. not sure the Bible mentions a dude with a machine gun, or a rack of glassware from Pier One. Let’s go right to the source. Was Jesus flipping tables over taxation, or was it something else?

12 And Jesus went into the temple of God, and cast out all them that sold and bought in the temple, and overthrew the tables of the moneychangers, and the seats of them that sold doves, 13 And said unto them, It is written, My house shall be called the house of prayer; but ye have made it a den of thieves.

Wait, “all them that bought and sold in the temple?” Is this guy some kind of anti-capitalist hippie?

The moneychangers were tangentially related to taxes, but only in that they charged people ridiculous amounts of money to trade their Roman coins in for approved ones to pay the temple tax, which is not a government tax, but an offering to the Lord. The Romans didn’t get their hands on any of that until around 70 AD, but Jesus’ malfunction wasn’t with the tax anyway, it was with the profiteering. The “thieves” were the capitalists, not the government.

O’Reilly also promised a book on World War II, which hopefully will take a page from Quentin Tarantino, and feature Ronald Reagan killing Hitler with a big fistful of coal, or maybe a side of bacon.