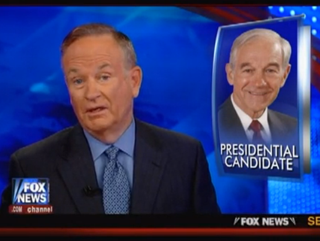 O’Reilly’s concerns stemmed from the fact that Rep. Paul had been vocally opposing the killing of Al Qaeda leader Anwar Al-Awlaki through the military drone program. Rep. Paul suggested that the unilateral decision by the executive to take Al-Awlaki’s life was unconstitutional. This seemed suspicious to O’Reilly, who asked Stossel to defend the claim. Stossel repied that he did find it concerning that the American government can “kill people without declaring war,” and that “it makes me uncomfortable to think that the executive branch can’t even explain what the evidence is” to kill Al-Awlaki.

O’Reilly then asked about the Iran question: Rep. Ron Paul has said repeatedly he does not believe it is America’s business to interfere with Iran’s quest for nuclear energy, a position O’Reilly described as “fine” with nuclear weapons. Telling Stossel he had asked Rep. Paul many times for clarification and “I got a bunch of gobbledygook,” Stossel retorted that he didn’t see an alternative– “we’re going to occupy a country two and a half times the size of Iraw and pry it from their cold, dead hands?”