Bill O’Reilly To Newt Gingrich: ‘The Perception Is That You Don’t Have A Chance’ 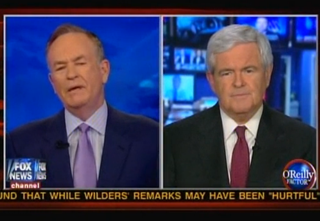 2012 Republican candidate Newt Gingrich broke his silence after the second group exit of seniors staffers in his campaign with Bill O’Reilly tonight, and did his best to explain that the lack of loyalty in his camp was a product of the difficulty of the mission and not of the probability that he would win. “The route I’m taking is hard,” Gingrich offered by way of explanation, though he seemed to fail to convince O’Reilly, who reminded him that “you’ don’t have a chance.”

O’Reilly was fairly mild to Gingrich at the beginning of the interview, even offering that it could not have been him that caused his staff departures since “your message hasn’t varied; your message is the same now as it was a year ago when you were doing commentary on this network.” Gingrich agreed, and added that what he was trying to lead was “very different from a traditional campaign” and that he was “going to talk about very big ideas.” O’Reilly didn’t accept this as an answer, however: “didn’t they know that?”

Ultimately, though, as Gingrich repeated his response, O’Reilly let him go, and instead shifted towards the fact that it was starting to appear that the Gingrich campaign was not going anywhere. “Perception if often reality,” O’Reilly argued, “and the perception is that you don’t have a chance.” Gingrich replied that he acknowledged the difficulties but had a battle to fight for his ideas and would not be stepping down. O’Reilly concluded with some well-wishing: “fight the good fight out there, slug it out.”