O’Reilly To Stephanopoulos: ‘If The Election Were Tomorrow, Romney Would Win’ 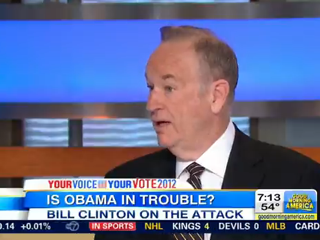 Bill O’Reilly took a respite from his post hosting The O’Reilly Factor every night to pay a visit to George Stephanopoulos on Good Morning America to discuss the 2012 election, Wisconsin, and to take a jab or two at the Queen of England.

“If I were 250 I would have been throwing tea in the harbor, I’m not a big royals fan,” O’Reilly admitted, though he gave the Windsor family credit: “they don’t work and they make millions of dollars, how do you get that gig?” After a few jokes, Stephanopoulos then turned to the 2012 election, asking O’Reilly what he thought of Clinton warning that Romney would be disastrous for the economy. “After how many drinks was this that he said Romney is going to bring European socialism?” O’Reilly joked, “it’s insane.” He added that “it’s amusing to me– and I’m sure it is to you, but you’d never admit it” and called it “guerilla theater,” though Stephanopoulos clarified that Clinton warned of austerity and not socialism. Either way, O’Reilly added, “how does he know?”

O’Reilly summarized the election as a “referendum on President Obama,” which means that the fear people have of the economy would hand Romney the election today. To that end, he advised Romney to “get out of the way, don’t be overbearing,” and to be “low key” except for the debates, when it is time to be “authoritative.”

O’Reilly also commented on Wisconsin, where he predicted Governor Scott Walker would win because “on paper, Walker’s done a good job.”