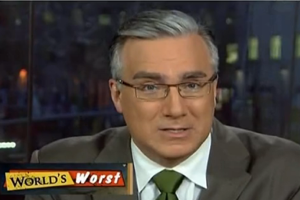 Today’s results of Keith Olbermann‘s “Worst Person in the World” competition saw his arch-rival Bill O’Reilly take home the gold, again, for his reprimand of Senator Tom Coburn, where he argued that no one on Fox News ever said that under Obamacare not having insurance could lead to jail time. Except all the evidence Olbermann presented was from last fall, when jail time actually was considered as a potential punishment.

“Worst Person in the World” is rarely a newsworthy segment since it’s possible to figure out the winners (losers?) on any given day within three to four guesses (any rotation of Glenn Beck, Sean Hannity, O’Reilly, and the first response of a Google “I’m Feeling Lucky” search for the word “conservative”). But tonight’s attack on O’Reilly is notable because both parties are half-wrong.

Olbermann’s mocking of O’Reilly’s “crack team” of investigators for not finding one instance of someone on Fox News claiming that Obamacare would criminalize not being insured is completely justified– many of the instances of this were either by close colleagues or on The O’Reilly Factor itself. Our managing editor Colby Hall pulled up a clip of Glenn Beck (not the same one as Olbermann’s) warning his audience that not having insurance could put them in jail.

And he noted what Olbermann chose to omit. All the quotes that Olbermann’s “crack team” found were from October or November, during which health care reform was still fragmented into various bills and the possibility of jail penalties for not following up properly to acquire insurance was still possible. Sure, O’Reilly was technically wrong– very wrong– to claim that no one on Fox News had ever claimed jail time was a possibility, but omitting the context in which it is possible O’Reilly was operating is just as disingenuous on Olbermann’s part.