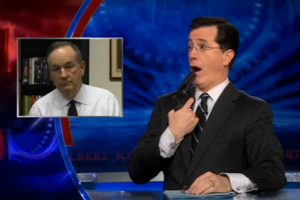 Last night, Stephen Colbert made light of the attacks Anderson Cooper has received in Cairo, jokes which, this morning, we proposed were inappropriate. Fortunately, after that segment, the Comedy Central host turned to a lighter subject: the existence of God. Colbert showed a clip of Bill O’Reilly’s recent response to the critics of his much derided “God is real because the tides go in and out” quote. However, O’Reilly’s new explanations for the existence of God only soothed Colbert for a minute. The more he thought about it, the more questions it seemed to bring up. Soon Colbert had pulled out his trusty handgun and was contemplating suicide. Oh no! Could this have been O’Reilly’s plan all along?!

In O’Reilly’s video, he had asked “How did the moon get there?” This seemed like a simple enough question, but Colbert had huge problems with where that kind of thinking led.

“Look, all Bill is saying is that God is the answer to everything. And where does God come from? That’s easy…oh, God…that can’t be answered with God. I mean, how could he make himself if he wasn’t there to make him. Therefore there is no God and everything is just a chaotic collection of random energy with no meaning.”

Colbert then put his gun to his mouth, said one more “I love you, Bill O’Reilly,” and was about to end it all before he, thankfully stopped himself.

It was a funny segment made all the funnier when you remember that Colbert (the man, not the character) is actually a Sunday School teacher and probably has to give answers to these very questions every week.

Check out the clip from Comedy Central below. The O’Reilly section begins at 2:30.