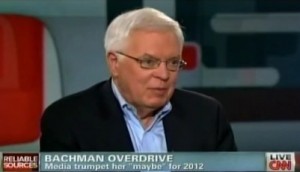 Host Howard Kurtz, and panel, wondered if Bachmann’s command of an Iowa audience cut against that notion, and whether sexism is to blame for the gulf in media interest between Bachmann and fellow Minnesotan Tim Pawlenty (R-MN), a notion which Press handily dismissed.

Kurtz began the segment by asking why Bachmann’s announcement of a possible announcement got “fifty times” the media attention of Tim Pawlenty’s actual announcement, to which Press replied “The media really wants her to become a candidate because she’s such a laughingstock. I think it’s a dumbing-down of American politics.”

Kurtz, though, rebutted Press, saying “You call her a laughingstock, here’s Michele Bachmann on the front page of the New York Times this morning, she apparently blew the room away at one of these Republican cattle-call events in Iowa.”

Based on Kurtz’s standard, of course, you could as easily make the case that Gallagher is a serious presidential contender. Having said that, Bachmann’s ability to rouse the rabble will loom large in the Republican primaries, should she decide to run. As panelist Jennifer Rubin (of WaPo’s Right Turn blog) pointed out, Bachmann’s attack-dog style could throw a big monkey wrench into the hopes of several current GOP favorites.

Former Fox News contributor Jane Hall said she felt it was “sexism to focus so much on (bachmann) as opposed to Tim Pawlenty,” which is a bit like saying it’s sexism to pay more attention to a fireworks display than a can of Sterno. While Bachmann has endured, and will continue to endure, forms of sexism, such as gender-based insults like “bimbo,” chalking up the Bachmann/Pawlenty media gap to sexism robs Bachmann of credit that she has rightfully earned. For that matter, it also dismisses the hard work Pawlenty has put in to make himself the Human Yawn.

Whether you support Michele Bachmann or not, Press’ central premise is absolutely right, her inclusion in the race amps up the media spectacle exponentially. It’s also a win-win for Bachmann, who stands to lose little as a Republican running from the House, but who also stands to reap the benefits of the red meat with which she will engorge the conservative base.

Less clear is her effect on the Republicans’ chances at defeating Barack Obama. Her presence in the race will no doubt amp up the other candidates’ appeals to the Tea Party and Birther crowds, which could turn off general election voters, but which could also result in an energized base that wins the turnout battle, much as it did in the midterms.